Dora and Davey are going through, shall we say, an awkward period. The three-month-old littermates were born in the U.S. to a Saluki mom from Kuwait. Of the six unexpected puppies, these two – and their rather severe case of demodectic mange -- were surrendered to SHUG.

First off – this type of mange is not contagious to other animals or humans. It's caused by something almost all dogs already have but usually don't react to at all. While they would naturally outgrow it as their immune systems mature, we are actively treating it now to help them along.

Dora and Davey are otherwise perfectly healthy, normal pups. But we admit, the patchy hair and angry skin can be a bit off-putting . . . so maybe a bit of information, plus an “awwwwwwww” photo might prompt some interest in these awesome pups.

Dora is the smaller of the two. Although her original owner described her as the "alpha" of the litter, Dora seems to have settled down quite a bit. She's happy to find a quiet spot to curl up in by your feet while you work.

Her big brother Davey is 33 lbs at 3 months old so we expect him to be a good sized dog as an adult. Despite his size, he loves to be picked up and cuddled, and always wants to be near the action, sitting politely and waiting for someone to notice what a good boy he is. 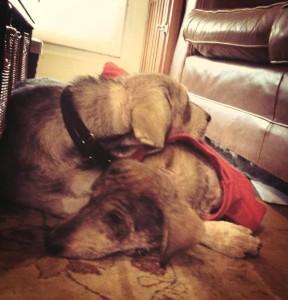 While we treat these otherwise adorable pups, we’re looking for an experienced foster home or open-minded forever home. They will come with their medicine to see them through their treatment. Although we don't know who their father may have been, we can promise they'll be beautiful when they're hair grows back in a couple of months!

These two pups are pretty bonded, so a family willing to take them both would be ideal although it's not a requirement. Look deep into their patchy little faces . . . are they calling to your heart? 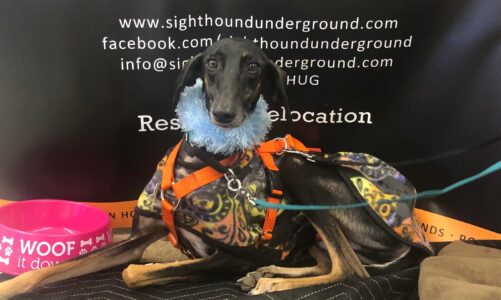