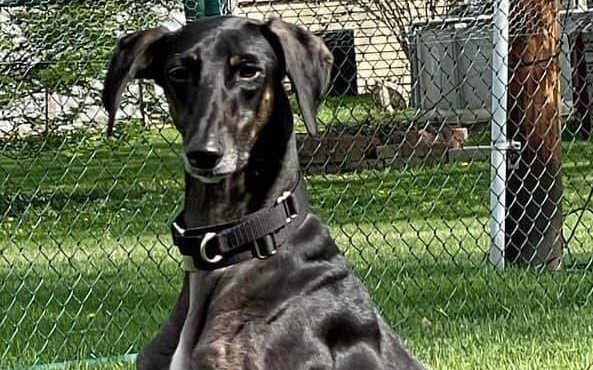 If you've been following Aquila's journey, you know he found his forever home in April. A month after his adoption, Aquila’s adopter posted this picture...and it’s incredible! When his foster mom saw it, she wrote:

He looks so proud and regal…and I know he’s VERY happy. A lot of people think that using psych meds on dogs is ridiculous. Several of those people PM’d me with their negative comments and criticisms. This boy arrived last July, completely feral from Qatar...he hated me, hated living in a home, and bit me frequently. He growled at me constantly and slunk around, running from me every time I stood up…he was always stressed.

I asked the vet to start him on trazodone, which is an anti-depressant for humans, that’s great for anxiety in dogs. Once we found the right dose for Aquila in late October, he improved by the day. He started to trust, didn’t bite me and was seeking affection from me. His friend Giza arrived and he formed a strong bond with her, but he wouldn’t have been able to do so without the trazodone.

He went to his forever home with Giza in early April, and was doing so well the vet started to lower his trazodone dose. So far he’s doing GREAT! In another week or so they can try lowering it a bit more. It’s possible he may no longer need it, or may only need a low dose long-term. We’ll find out.

Trazodone calmed Aquila enough to explore his new world, and it eased his fears so he could trust and adapt to his new life. A life he’s decided he LOVES. The difference in him is literally day & night.

Many dogs, especially rescues, who have often lived traumatic lives, can benefit from appropriate meds. Trazodone isn’t a miracle, but it works very well for anxiety and traumatized dogs. Many vets reach for Prozac, but it’s not a miracle either, and sometimes doesn’t work for dogs with anxiety & trauma.

This pic says everything about why I wanted to try medication for Aquila, and why that was absolutely the right move! Aquila has his own family, that love him wildly...and that’s all that matters to him

. He’s still a proud desert prince, even in Indiana