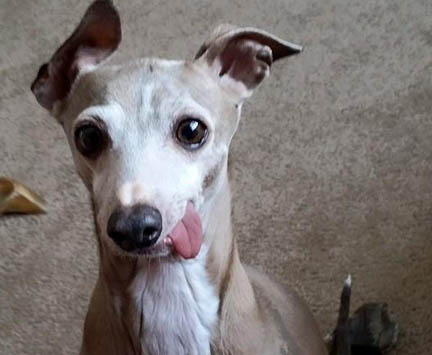 It was a heart-lifting story that started in October of 2013 -- the Sighthound community rallied around two Italian Greyhounds in need and transported them from Arkansas to Virginia (no easy feat). The little boy, Joe, went to his happy ending, but Dottie, the little girl, turned up heartworm positive and went into foster care for treatment.

The support Dottie received was amazing. Everyone could see that this little girl was a fighter--and that was a good thing, because Dottie was in the battle for her life. When Dottie came to SHUG, we thought she was about 8 years old. Her age combined with her poor health due to living outdoors meant that even the "slow kill" heartworm treatment was almost too much for her. Dottie spent many nights at the vet and when she was home her foster mom stayed up most of the night monitoring her condition. 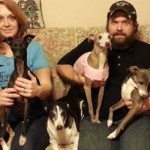 It surprised no one when Dottie's foster mom, Missy Viars, became her forever mom.

Since then, it hasn't been all blue skies for Dottie. After completing her heartworm treatment, Dottie still tested positive in September of 2014. Determined to get this behind her little girl, Missy worked closely with her vet to try the more aggressive "fast kill" treatment. Twice Dottie stayed with the vet on 24 hour observation and despite some scares, this tough little girl made it through and finally, in March of 2015, received her first negative test!

Dottie's vet says in reality she's probably around 14 years old and has obviously had a rough life. Although she's now finally heartworm free, Dottie will always feel the effects of the parasite and the strain it put on her little body. But everyone who knows Dottie is amazed by her will to live and thrive. This little girl is a survivor.

Says her mom: She is doing great. She is sassy and such a diva. She loves to dress up and prance around. She is such a miracle.

A miracle with a sense of fashion. What more could you ask for?

One thought on “Dottie, the Arkansas Angel – Still a Miracle”