Sherry Van Dyke's sweet girl Pilar is home now, safe and warm on her own soft couch . . . but nine months ago she was in the bottom of a well in Spain. When Sherry Van Dyke talks about traveling to Spain and looking into the dry well that could have been the grave of her lovely Galga she struggles to put what she saw into words.

She also struggles to explain why it was so important for her to fly from her home in Washington State to Murcia, Spain, to see the well herself.

“I just needed to know what she had gone through. I didn’t want to forget where she came from,” she said. “It was way harder than I thought. The fact that someone could lift her up over the side and leave her. And who knows how many more are down there.”

For Sherry and Jane Pace, another SHUG volunteer and adopter, the trip to the well was not the only rough part of their trip. There was also the poo. A lot of poo.

“Our intention was to do work,” Sherry said. “We weren’t there for sight-seeing.”

The two SHUG volunteers worked at Galgos del Sol while in Spain, the rescue that saved Sherry's Pilar. They cleaned kennels and cut toenails and changed bandages. They were happy to help Hudson, a Galgo recovering from deep wounds, who they'd been following on Facebook.

Sherry was surprised by how rural the area was. They were a five-hour train trip from Madrid and a world away from the big city. Sherry described dogs and cats running through the streets, darting through cars and going through garbage. She talked of abandoned cement buildings and trash-strewn areas with scrubby trees.

“The first couple of days it was hard not to cry,” she said. “It was very emotional.”

But the GdS volunteers helped them cope. And so did the dogs who live there, waiting for their forever homes.

“They are so friendly,” Sherry said. “Some were feral, very afraid. But most were friendly. They’d wag their tails and be all over you – a take-me-home kind of thing.”

While they were there, GdS got a call about two puppies someone found in their yard. Sherry and Jane helped retrieve them. They also got to tag along on the day-long trip to St. Vincent’s vet hospital, where several of the dogs needed to be seen. Sherry was very impressed with the quality of care there, and how – even with the language barrier – the vets wanted her to understand what they were doing.

Despite the hardships and some images that she can’t shake, Sherry is glad she took the trip.

“I came home with this renewed sense of doing anything in my power to increase adoptions,” she said. “Some of those dogs are there for a long time.

She also praised the efforts of GdS and its director, Tina Solera.

“Tina is making a difference. She has given her entire world to these dogs,” Sherry said.

Note: If you have as few as 40,000 airline miles, you can fly to Spain and back. SHUG can help arrange a kennel visit or a longer stay if you're interested. Remember, even if you're just going to Spain for business or pleasure, we can still attach dogs to your return ticket. We pay all of the dog's expenses and our volunteers handle the dog at the airport on both ends. It can mean some extra time at the airport--getting there a little earlier and taking a little longer through customs--but we try to make the experience as painless as possible. We also have volunteers who are willing to take off of work to fly there and back if you're interested in donating your miles. Contact us at info@sighthoundunderground.com if you'd like to help. 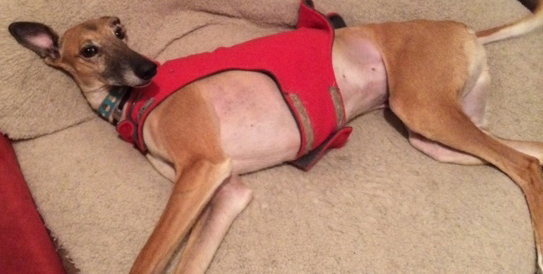