Winter is a two-year-old Borzoi who came to SHUG with a diagnosis of bone cancer. Unable to send him to the bridge without ever knowing the love of a family, SHUG Director Michael Owens OK’d an amputation, raised the funds for his medical care, and crossed her fingers that he’d have many good years of life ahead despite his diagnosis. Winter healed well and began to make up for lost time. Then he found his family. This is their story.

A year and a half ago, I reached out to SHUG because my husband and I wanted a Borzoi.  A week after we put in our application, we picked up Alma, one of the irresistible Afghan/Ibizan Hound puppies, but having a Borzoi never escaped my mind. Plus I always knew we would somehow end up with four dogs.

In January, Winter came to SHUG followed soon after by another Borzoi boy named Tommy Bahama. Winter’s story, particularly, broke my heart. I followed his progress on his Facebook page, and I kept thinking about the time I was 12 and I insisted that my parents had to rescue a three-legged dog because they have a harder time finding a home.

Fast forward to several weeks ago when my husband and I were on vacation in New Orleans. I saw a video on Facebook of Winter going down the stairs and Tommy Bahama playing, and then I looked at my husband and told him it was finally time for us to foster. Life had slowed down, and we had the space and love to take in another dog. I called Michael and talked about taking Tommy. We’d visit the next day and bring our three dogs to see how they got along.

We showed up early Saturday morning, and, truthfully, Tommy wanted nothing to do with us. I knew that could happen – there WAS a lot going on. Winter, however, was a different story. He walked over to me as I was sitting on the floor and kissed me on the face. Our miniature dachshund was extremely interested in him, and Winter was equally pleased with him. I couldn’t stop looking at him.

It wasn’t until Michael said to me, “Well, you know, you could take Winter,” that the thought entered my head. I hadn’t been thinking of it as an option when we walked in. I was worried about our deck stairs and how he’d be with all the dogs. The reality of Winter’s situation hit me hard -- we could take this dog home, but there’s no way to know how long he’d be with us. I’m an emotional person, and I truly had no idea how I’d handle the various scenarios.

I must have stared at him for 30 minutes as Michael explained his raw diet and when his next vet visit was. Then I had a serious revelation -- it was time for me to put on my big-girl pants and learn to deal with rough situations and possible heartbreak. That was it. We were going to bring that dog home, give him love, and hope that everything worked out. 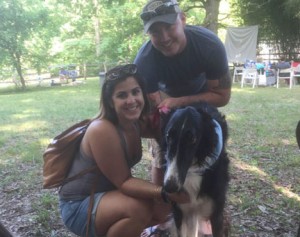 Winter came home with us that day. By the next evening he figured out how to go down and up those deck stairs. After 72 hours, I knew we were keeping him and he’s what SHUG calls a permanent foster.

My dogs did a wonderful job getting him used to our house. Alma has truly become his best friend, and Winter loves to groom Gus, the mini dachshund. He likes to share beds with Lillie, our greyhound, and after two weeks of observing how the house works, he’s made the couch his favorite spot. He went from hanging out in our bedroom to spending his day in the living room with the other dogs.

Thanks to the amazing fundraising for Winter, SHUG will pay for his medical bills for the rest of his life. I am so pleased to be Winter’s mom. That dog has stolen my heart. I’m thankful he can finally be a dog and enjoy romps in the backyard, naps on the couch. The other night, he climbed up into my husband’s lap while we were watching a movie. As I’m writing, he hopped over to me for cuddles.

He really is a wonderful dog, and we are cherishing every moment we have with him. He chose us the day we met him. My 12-year-old self would be proud of me -- we gave a dog a home that needed one.

First Person is an occasional series where we hear from SHUG adopters and volunteers. It was written by Maegan Dominguez.