First Connor gets adopted by a wonderful family and goes to live in Anchorage where he makes friends with a moose and puts his Russian heritage to good use all winter. Then comes spring and it’s time to take a vacation – Alaska style.

But getting there was no walk in the park.

First the family drove from Anchorage to Whittier. Then they took a three-hour ferry ride from Whittier to Cordova and then caught a 90-minute ride with friends on their fishing boat in order to get to the cozy cabin on Hawkins Island in Prince William Sound.

After his long trip, Connor even had to swim to shore before the vacation could begin.

The island is 12 miles long with only six other houses. There are no roads, and no electricity or running water. Connor’s mom, Cheryl Rosa, describes the island as a lush rain forest ala Lord of the Rings and says it’s one of the most beautiful places in the world. 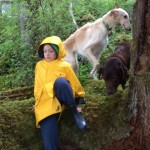 For almost two weeks, Connor got to run and explore with his Labrador retriever brother and the family, though he pouted about the rocky beach and will get a pair of booties for the next outing.

He also got to explore by water and rode around in the motorboat (Connor loved the boat), but, true to his nature, he also found the couch in the cabin and thoroughly enjoyed exploring that in true Sighthound style.

“We were not sure how Connor would like it all,” says Cheryl, “but if there’s one thing I can say for him, it’s that he goes with the flow.” 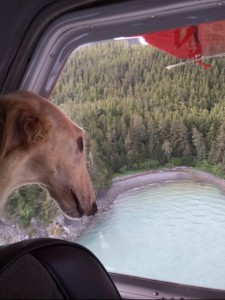 If all that wasn’t exciting enough, Connor also went airborne. The family took a float plane for part of the return trip. How many Borzoi in the whole world can boast that?

“He was great on the floatplane-- it was cool to watch his eyes as we lifted off,” says Cheryl. “You have to wonder what they think.”