I saw Pinta the Podenco for the first time on February 1st on the Facebook page, Podenco Friends. I read her story -- about living in chains, about eating stale bread and being confined to tiny box in Spain, where “podencos” are used and discarded as hunting dogs. She had been turned into a perrera (a public facility where most dogs are euthanized) by her owner, a hunter who basically was done with her and wanted her gone.

By the grace of God, the beautiful, fuzzy white girl was rescued by Beverley Farmer, a wonderful English lady who lives in Spain and who has dedicated her life to save these amazing dogs. I looked at the pictures of Pinta and watched two videos of her and I immediately fell in love with that precious dog. She completely had my heart after I saw the video of her struggling to walk. She was panting so heavily, and she was so malnourished yet she was determined to walk further. I wanted to adopt her but she was so far away and I didn't know how I could bring her to the U.S.

Little did I know that Michael Owens of SHUG had seen Pinta as well and she was already scheduled to come to the U.S. even as I was just seeing her for the first time on Facebook. 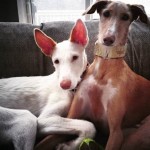 Pinta flew from Madrid to New York and Michael drove her to Falls Church, Virginia, where a few days later I adopted her.

It was a little rocky at first, when she joined our home in Maryland. She spent her first day hiding in my daughter’s closet. She sat there scared, confused and unsure about her life and future.

Alex, my Ibizan/Afghan hound from the famous litter previously highlighted on the blog, was the perfect ambassador and helped her adjust. Alex initially sat next to her, nudging her to make sure she was OK. Later, when she was more relaxed, he played with her very gently and even shared his toys with her -- which he has never done before with our greyhounds.

It didn’t take long (who, really, can resist the handsomeness of Alex?) and they have become best friends and partners in crime. Alex and Pinta sleep next to each other, run together outside, play together all day long, they even run away from me when I call them to bring them back inside the house. 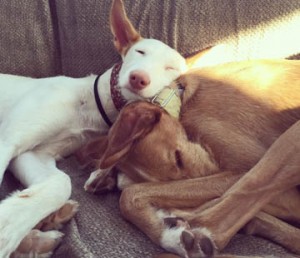 We were so lucky to find Alex – a one-of-a-kind dog. And then to find Pinta, who completes our family, is so amazing. She brings so much joy and happiness to our lives. She is a gentle soul, sensitive yet determined and strong. She endured so much pain in life yet her spirit is strong and she loves those who are around her.

Our journey together has just began but we will make sure her life is full of happiness, good food, play times with Alex, plenty of walks and runs outside, kisses, hugs, and scratches to her belly. She deserves it. We love her so dearly. I would like to say thank you to Beverley Podencos, Warren Beards, Michael Owens and many others involved for the incredible job you guys do for these dogs. Without you, these amazing dogs would not have a chance in life and our families would have remained incomplete. Thank you.

First Person is an occasional series for SHUG adopters and volunteers. The author is Basia Monaghan