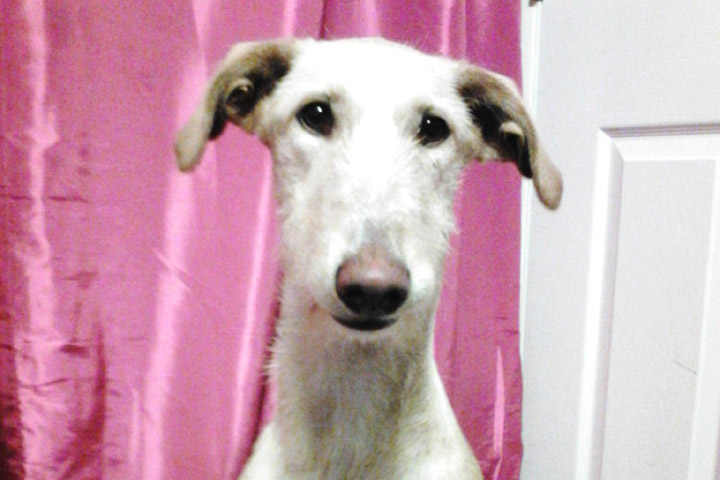 Just in time to join her siblings in Belated Birthday wishes, Wynter sends an update. If you read Wednesday’s update, you’ll notice some themes . . .

From Wynter’s Mom: Wynter (Named after the famous dolphin) is difficult to take pictures of because she's never still enough. But she’s doing well, and she’s very healthy. She gets along great with Frank the pug, Callie the cat, Inky the greyhound, and Jake the golden. But I have to say I think SHUG lied to us about her being an Afghan/Ibizan hound mix. I believe her true breed is a Billy goat/antelope mix. She is definitely the most wild and difficult to train animal I have ever raised. And that says a lot considering I used to be a zookeeper!

She will literally put anything in her mouth. I mean anything. Not only has she eaten the typical occasional sock, pair of underwear, or stuffed animal, but I have had to take a toad out of her mouth!  She's chewed through two harnesses and three collars, so "Houndini" cannot wear a collar unless she is supervised. She has also chosen to gnaw on the wood molding in our house, chewed up her own bed and kennel, eaten the solar deck lights and to top it off, chewed through the thermostat wiring on the a/c unit, which caused the blower motor to burn out right before the warm season. (We did mention a theme . . . ) 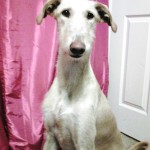 This is why I believe she is Billy goat. That and the darned beard!  Her other component is deer or antelope because she leaps over everything like an Olympic hurdler. Couches, baby gates, tables, children. There is a small bit of hound in her though because she has the voice of one. Barking, whining and howling to get her point across. Yet, at the end of the day, we love her so because she gives the best "neck hugs" and kisses.

Oh, and I almost forgot, SHE ATE A COUCH!

One thought on “The Last Afghan Pup – Wynter Checks In”