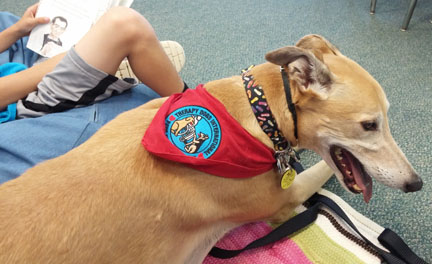 We adopted Indy (Jax Intrepid) in September 2013 after losing our previous greyhound to bone cancer. A couple of days prior to putting our beloved Bree down, I decided I needed something to look forward to after a month of sadness. I completed an application with our local greyhound adoption group, but they had no available dogs and they suggested I look at SHUG.

When I went to visit Indy, it was love at first sight and a week later, he came home with us.

He was a little unsure at first and had no clue how to “play,” especially with another dog. But our lab Annie was relentless. She kept dropping toys in front of him and running away. She’d wiggle and bark and run circles around him.  It took about two weeks and then they were racing around the yard together and playing “bitey face.” Having been with a previous Greyhound, Annie already knew all the tricks to keep up with a faster dog and how to play gently.

Bree had been a registered Therapy Dog volunteering as a Tail Waggin Tutor in our local elementary school. I hoped Indy could take her place. We started dog obedience in the late fall. Having trained many dogs, I have decided that although greyhounds are generally very polite and generally do fine without dog obedience, they are the hardest to actually train. We survived Level 1 (even learning how to sit), but needed a break before Level 2 to give the concepts time to sink in. We took Level 2 in the spring of 2014. Indy received his Canine Good Citizen Certification in the late spring.

We took an eight-week Therapy Dog prep class to give us additional practice before taking the Therapy Dog test. Greyhounds make perfect Therapy Dogs with their relaxed and loving personalities (plus they are perfect wheelchair height), but the obedience piece of the test for them is always the hardest. The class gave us a chance to see how he did with various medical equipment (he didn’t care), funny hats and props like puppets and balloons (he didn’t care), chaotic environments (he didn’t care). I knew the hardest part of the test for Indy to pass would be NOT taking a dog cookie from someone in a walker (the new ”Leave it” test) and the two-minute down stay.  Fortunately, former racing Greyhounds are exempt from the two-minute sit stay.

All the training (plus a little luck) paid off. Indy passed his test on the first attempt. He received his Therapy Dog credentials in September 2014, one year after we adopted him. He volunteered the 2014/2015 school year, letting 3rd graders read to him every week. Everyone looked forward to Wednesday afternoons -- when Indy came to school.

In addition to Therapy Dog visits, Indy also does meet and greets for the local Greyhound rescue.

It has been a wonderful experience watching Indy learn to be part of a family. From learning to play with Annie, to understanding which cats he could nuzzle and which he couldn’t, to finally learning to snuggle with me, he becomes more a part of us every day.  He sees his Therapy Dog bag and goes nuts, running in circles and barking until you put his “uniform” on. I’m so glad we were pointed in his direction almost two years ago. I look forward to him being part of our family for many years to come.

First Person is an occasional series where we hear from SHUG adopters and supports. The author of this post is Dee Waldruff. 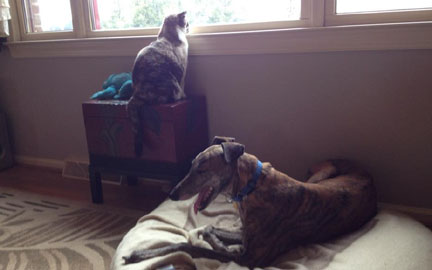 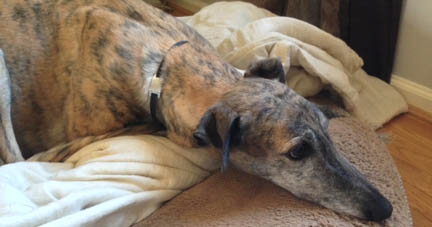