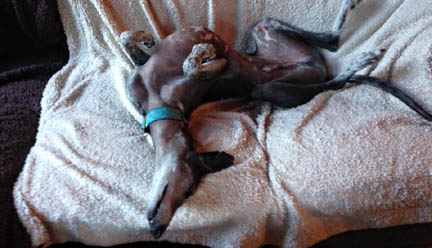 Mosquetero left Galgos del Sol, a shelter in the south of Spain on Saturday, Oct. 12, 2013. He flew to JFK airport in New York on Sunday and was met by SHUG director Michael Owens, who drove him straight to Virginia. Meanwhile, my husband and I drove from Ohio to meet Mo, as we decided to call him, at SHUG HQ by 8 Monday morning. It was love at first sight! We put him in the back of our SUV and drove home. The poor dog traveled more than 4,300 miles in less than 48 hours.

From the moment we met him, Mo was awesome... happy, sweet, loving and smart. Right away, though, we noticed that he drank and peed more than our two greyhounds. We took him to the vet, who determined he had a UTI, crystals in his urine and a very high pH. He also had a huge prostate - 10 times the normal size even for an intact male. We noticed a definite improvement with antibiotics, but he was still drinking and peeing excessively.

Two weeks after we got Mo, he had his first seizure. He doesn't convulse during seizures – but he becomes disoriented, uncoordinated, his neck muscles tremble and he starts turning his head back and forth. His pupils also dilate and he holds his ears straight out to the side.

Initially, we weren't certain it was a seizure. The next time it happened, we videotaped it and sent the video to Dr. Couto (a renowned Greyhound and Galgo expert). He consulted with a neurologist, who confirmed Mo was definitely having seizures. When they started happening more frequently we put him on phenobarbital. He had horrible reaction, so we tried Potassium Bromide instead. Fortunately, within another 48 hours he was back to normal and the seizures did slow down. 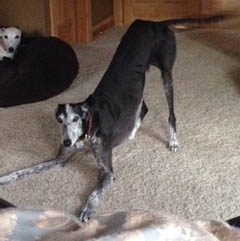 At this point I could predict when he was going to have a seizure. If his drinking and peeing became excessive for that day, he would have a seizure that night. The seizures were 30 minutes long every time. Meanwhile, the pH of his urine was so high that we changed his dog food to a lower protein food and then, eventually to the prescription dog food for urinary tract health. Dr. Couto consulted a renal specialist who told us that some dogs will just have high urine pH and there wasn't anything else he could offer us. We also went to a reproduction specialist, who ultrasounded his kidneys, bladder and prostate. All were normal.

When the drinking began to get worse we had to ration his water, which was difficult to manage with two other Greyhounds who needed access to water.  Mo figured out there was water in the toilets and he would drink them dry, too, if we forgot to keep the door closed.  We drove him to Pennsylvania to see Dr. Couto in person. More lab work followed with suggestions of various anti-anxiety meds. Xanax didn’t help, though.

The idea of an MRI was discussed, but the cost was $3,500 and there was no treatment even if a brain tumor had been found. We checked him for Addison's disease, Cushings, diabetes, and pretty much every endocrine disease anyone could think of and everything came back normal. The one possibility we hadn’t tested for was Diabetes Insipidus. It's very rare and the test involves withholding water. No one had the strength to do that to Mo.

At the end of February 2014, things suddenly got worse. He paced constantly. We tried giving him the Xanax on a schedule, water more frequently, taking him for walks constantly... NOTHING helped. This went on for days. I consulted with Michael at SHUG, who mentioned trying a raw food diet. I went straight to the store and bought Primal raw patties. It was the only thing we would feed him.

Eventually, in desperation, we decided to do the water deprivation test at the vet’s office. That way we could sleep and they could monitor him.  We gave the vet strict instructions that Mo could only get the patties to eat. He survived the night without water and they checked his urine first thing in the morning and he concentrated it. So, it was a negative test. They rechecked his electrolytes and his sodium was increased a bit. The vet said it was a little unusual. He called me back about two hours later to say the levels had gone up more. They gave him IV fluids and rechecked it and it was still on the rise.

It turned out to be a clue -- increased sodium can cause confusion and lethargy. When he wasn’t getting enough water his sodium would go up and so would his agitation. It was the first time in four months that anything made any sense.

Then things went from bad to worse. When I picked him up from the vet, he could barely stand. My husband and I decided to take him to the Metropolitan Animal Hospital, which is a specialty clinic and an ER. I went home to let out my dogs and in that short time, Mo became completely unconscious. I didn’t know if he would be alive when I got to the ER. They came out with a stretcher to get him because he wouldn't move.

For the rest of Mo’s story, come back tomorrow.