Ode To the Resident Dogs

They come in, often skinny and scared. They may smell funny. They might creep into the best bed. They need attention. They don’t know the house rules. They are the foster dogs.

And the heroes of this scenario are often thought to be the foster parents, who open their lives to this parade of needy pups. Without foster homes, SHUG and many rescue groups couldn’t do what they do.

But look a bit closer. Who are the real heroes? The resident dogs. They are the ones who move aside – over and over – and let strange dogs into their space. Without their kindness, foster families couldn’t take in foster dogs. 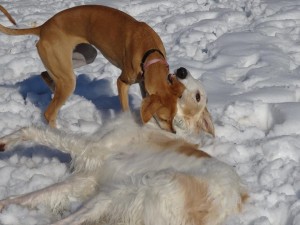 The resident dog lets little Binky get the upperhand during some roughhousing. 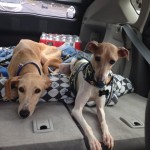 The resident dog, right, may get in the car to accompany the scared foster to appointments so they are not alone.

The resident dogs may relinquish the best couch or the best bed with grace and maybe just a little sigh. A good resident dog may lay on the floor next to the crated foster – to keep her company – or even offer up a butt as a pillow. The resident dog may get in the car to accompany the scared foster to appointments so they are not alone.

But there is more. The resident dogs may put up with a little pee where it doesn’t belong, an occasional flea or two. Rarely (fortunately) they may have to put up with a growl or a snap. After all, foster dogs are not always perfect.

And after all this kindness, the foster dog moves on. It’s with much happiness, but we never really know the impact on the resident dogs. Are they happy to see the stranger leave or do they mourn the loss of a friend? There are times when the resident dog reaches out a paw and says this one stays.

There are times, though, that the resident dog says no to the plans to move on. Not this one. Not this time, they seem to say. And they reach out a paw and that one stays.

The resident dogs are the heroes. Without their kindness, so many dogs would go without homes of their own. If you have one of these special dogs, give them a kiss for us.