From the Director: How SHUG got an RV!

You may have seen our recent GoFundMe campaign to raise money to buy SHUG an RV. In the last two and a half years our volunteers have transported over three hundred dogs! Until now we've done this in our personal vehicles--up to 6 dogs at a time plus humans! In addition to the chaos of moving so many dogs in an open vehicle, we also often have to stop and take a "nature break" at rest stops along our routes. Not only can the facilities be gross and sometimes dangerous but we also had the added fear of leaving the dogs alone in the car.

What we really needed to carry on our work was a larger vehicle--with a bathroom! We needed an RV! Obviously we didn't need anything new or fancy since we were just going to fill it up with dogs. Over the last couple of months I've approached several RV owners about donating their vehicles with no luck, so we started the GoFundMe campaign to raise the money to buy one.

Just as our campaign was getting under way, an ad popped up that caught my eye. This was for a vintage RV that had been stripped down inside and primed but never finished. The engine was in good shape, the inside was ready to be customized, and the price was right! The owner was really just looking for someone who would keep this classic machine on the road and help it keep having awesome adventures.

On Thursday morning I called the owner and not only was the RV perfect, but the owner even has Sighthounds! And he offered to donate the RV to SHUG!!! Woohooo!

The only downside to this wonderful confluence of events was that the RV was in Michigan. But, hey, we're SHUG! We can do anything, right? In all seriousness, it was a near thing. This totally wouldn't have happened without Fawn Friedman, who drove us 8 hours to Michigan and then followed us 12 hours home. (Did I mention I've never driven an RV before and it rained the entire way? And Pennsylvania is very curvy.) And there's no way I could have dropped everything and gone on this trip without Julie Valeriano, who changed her own plans to be able to take care of the dogs at SHUG HQ for the day. Seriously, you ladies rock and this wouldn't have happened without you.

But of course, the weird thing isn't that we were able to find two awesome volunteers to drop everything and make this happen. The weird thing was driving 20 hours with no dogs in the car! We set out at 11:30 p.m. that night and arrived in Michigan around 8 a.m. After spending a couple of hours learning about the RV and getting a feel for driving it around a parking lot, we hit the road home. Twelve hours later, we were back at SHUG HQ, tired but happy. (I think. I don't actually remember it that clearly. There were several 5 hour energy shots involved. Although when you're trying to stay awake, nothing beats the shot of adrenaline from almost hitting the Jersey wall.) 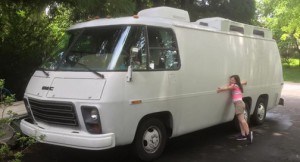 And here she is! This is Harvey the RV! And yes, she's going to need a little work but she's actually pretty easy to drive. There isn't a lot in the interior and we may remove what's there and start completely fresh with a dog-optimized layout. In the short term we're going to do some shorter trips to work out any kinks and decide what works best for the dogs. Harvey actually was built as a broadcast production van for NBC right off the assembly line in 1978 so she doesn't have any windows down the sides which means we can be really flexible on our layout. And it means we can paint a really big logo on the side, too!

Keep an eye out for our adventures!

Leave a Reply to Kathy