The Year of the Greyhound

Greyhound racing in the US has been steadily declining for over 20 years. In 2015 I was invited to give a talk at Greyhounds in Gettysburg. If you aren't familiar with GIG, it's the largest gathering of Greyhound owners in the US annually. To that group, I showed this slide: 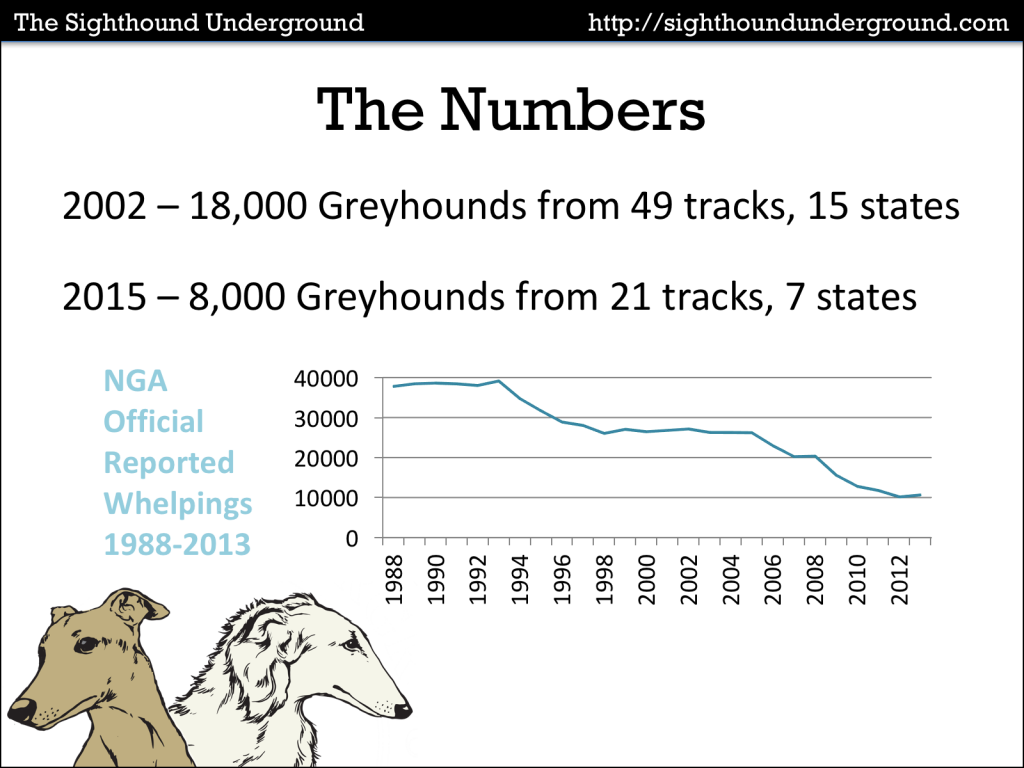 The focus of my presentation back then was really on the needs of adopters. As a volunteer with a Greyhound adoption group, I had scheduled transports of dogs from Florida to the Mid Atlantic area . . . and it had become very clear to me that there were fewer and fewer Greyhounds available. As an adopter and admitted Greyhound addict, this was a problem for me and the other serial Greyhound adopters like me. The Sighthound Underground was founded, in part, to address that need.

The underlying concept of SHUG was this realization that the Greyhound pipeline was drying up and that instead of letting this vast network of Greyhound adoption groups simply fade away and disband as it became harder and harder to find dogs, we would re-purpose it. We would use this network of Greyhound-savvy volunteers and adopters to help other sighthounds in need--like borzoi, saluki, and galgos.

Today, we have come full circle. As SHUG enters its seventh year of operation, the network we have built--from coast to coast, from Florida to Canada--will help support the flood of Greyhounds resulting from the passing of legislation closing more than half of the Greyhound tracks in the US. We built SHUG to console ourselves when racing ended, but it will now serve the Greyhounds who are the real victims of racing's decline.

One of the greatest barriers to moving dogs from tracks to adoption groups is the logistics of vetting and transportation. Many groups are not equipped to take large groups of dogs to be vetted and may not have access to low cost vet services. In addition to ramping up our own foster and adoption operations, SHUG will serve as a way station for Greyhounds heading to other groups throughout the Mid Atlantic, New England, and eastern Canada. We will spay/neuter, vaccinate, and do Heartworm testing on new retirees before sending them on to approved groups. This should streamline the movement of dogs from the south and make it easier for northern groups to access dogs without forcing track staff to spend multiple days on the road transporting dogs.

To accomplish this goal, we will be working to expand SHUG's capacity over the next few months. There will be challenges. Expect to see more fundraisers. We will ask for your help. A lot. Several of the tracks in Florida that had completed their racing for the season have already announced that they will not be reopening in the Spring. Most of the dogs at those tracks will be heading to adoption groups. The best racers from those tracks will go to other tracks across the US, where they will displace the dogs already racing in those locations. From the farms where Greyhounds are bred and raised, brood mommas, studs, and puppies will also need placements.

SHUG has always been the safety net for seniors and broken puppies and that will not change. Likewise, we will continue to receive other sighthounds and dogs in need from Spain, Qatar, and Korea. We will need your help to make sure that we can continue to help all sighthounds, while building the capacity to support Greyhounds in need. For the next year, that is our focus. I hope you will join us in making 2019 the Year of the Greyhound.

Uncategorized
SHUGer
No comments
9573
0
0
No tags