On July 10, 2013, my beloved Cozmo died. He wasn’t supposed to live as long as he did given his epilepsy and megaesophagus. But until his very last day he was a happy puppy-like dog. I was gutted by his death.

I wanted to try living without a dog for a while. It was a difficult year. Every time I came home to an empty house, my heart hurt a little. It is definitely more convenient not to have a dog, but the companionship was missing. I decided I needed to find my next little boy.

I began going to adoption events. They reminded me of the movie, “Empire of the Sun,” where the parents long separated from their children during the war scan the crowd, desperately looking for a familiar face. I knew my boy was out there somewhere, I just had to find him.

Then I saw Warrick on Petfinder, with his adorable face and that big silly grin. I didn’t notice what breed or where he was from. I did notice that his adoption fee was about twice the average, and wasn’t sure why, but didn’t care. I filled out the application and waited. I was so happy to hear we passed the application process, and we’d be able to meet him.

At the meeting, Warrick was bashful, and so was I. I was afraid to get too close to him, afraid that despite his perfect appearance, he may not be right for us. He also reminded me a lot of Cozmo, which reminded me of the heartbreak of his passing. 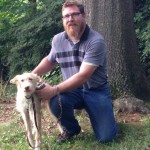 My husband, Craig, got on the floor and coaxed Warrick to be petted. I was in love already, but still so afraid. I needed to think. Craig and I went out to a wine bar, and I sat mostly in silence. Then I turned to Craig and said “He’s my boy.” It was done.

At first he was shy with everyone; we had to coax him outside, into his crate, to be in the same room with us. He kept his tail tucked in unfamiliar situations, and shied away from tall men.

I work from home, which gave me the opportunity to get to know him quickly. Every day he opened up more to me, and became more bouncy. He only had two accidents in the house. He explored his new location, learning words quickly, and he learned to deal with the cats.

When I’d leave the house, I put Gordo (named for a mountain near his original hometown) in a crate. When I returned, he had clearly been distressed – the crate frame was bent and he’d tossed around his food and water bowls. He got a bit better as time passed, but it clearly didn’t like being alone. He also remained afraid of Craig, even as he became more confident generally. And he was trying to play with Squeaker, the cat, who didn’t always appreciate the attention.

I thought maybe another dog could help. Gordo clearly wanted a companion, and the cat just wasn’t enough. Maybe another dog would love Craig, help Gordo get out more energy and be more confident. I thought it was probably naive to think another dog would be the answer to the (fairly minor) issues we were having. But the thought wouldn’t go away, and, to my surprise, Craig was all for it. 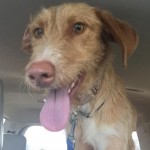 Xero, the last remaining sib, is available for adoption.

I’m not sure when the idea of getting one of Gordo’s siblings came up, but it did, and once that idea was out there, I wanted it to happen. Not just the same breed, not just the same rescue, not just the same momma -- the same litter. Gordo had two siblings left in Spain, Xero and Megan. Megan was the smaller of the two and we decided to move forward to get her to the U.S. (By the way, Xero is now here and available for adoption.)

If we waited for Megan to be brought by SHUG to the U.S., it was likely not to happen until December. We didn’t want to wait. When Craig was scheduled to be in Paris for a conference, and his timing coincided with several dogs leaving out of Madrid, it seemed perfect. There were snags along the way – a lot of snags – but we kept moving forward.

I’ll admit, I was picturing the cutest, most lovely moment, when the two siblings would touch noses, recognize each other and hug, whine, pee all over each other, whatever! It was less dramatic than that, but within two weeks Gordo and his sister – now called Emilia – were thick as thieves.

They play together, sleep together, eat together. Gordo now approaches Craig, takes treats without too much hesitation. Gordo taught Emilia how to go up and down the stairs, and Emilia taught Gordo that the world and the people in it aren’t so scary. He is still a shy dog, but he is miles ahead of where he was. She is a beautiful dog, more delicate and feminine that Gordo.

They may not have had that initial “OMG MY SISTER” moment, but I love seeing Gordo and Emilia giving Craig hugs and kisses, seeing them use each other’s fuzzy butts as pillows, seeing them curl up at night and lick each other’s ears. My love has not been divided and shared, my love has doubled.

First Person is an occasional series where we’ll hear the stories of previous adopters. The author is Peg Nottingham.