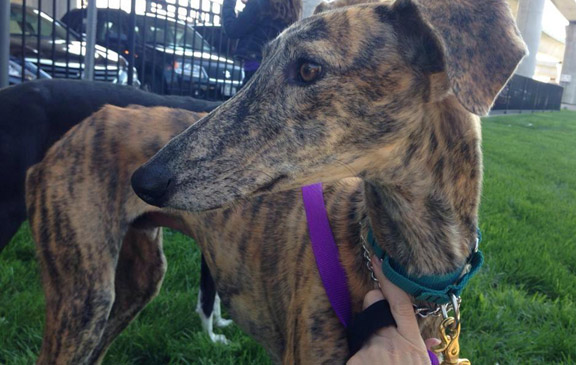 As many of you know, one of our recently adopted Galgos went on the lam last week. While exploring his new home, Versace figured out how to open a storm door and slipped through before his adopters could grab him. He ended up in the Palisades section of Washington D.C. just above the Potomac River and a bit outside of Georgetown.

The Palisades neighborhood is close-knit and they were quickly aware of the renegade brindle Spanish greyhound. His adopters had spread the word and spurred a search, which, for the first two days, included word of sightings, but no success.

Then, on Friday, SHUG Volunteer Rebecca took charge of the search. This is her account:

We had gotten a tip that Versace had crossed a major street called Dalecarlia, so we set off in that direction. Tracy, Myles and their SHUG galga Drusilla had joined the search. Tracy and Drusilla started out on foot on Dalecarlia, and Myles went searching in the car.

Near the top of the hill, Tracy started seeing a nose and face pop through the trees on the side of him; he recognized it was Versace. Versace followed him and Drusilla to a clearing, where Tracy sat down and started coaxing Versace to come closer with the help of bacon. (Note to self: Always bring bacon to a loose dog hunt.)

Myles showed up and they both sat down and had Versace coming up and sniffing, but he was still leery of them. I got the information and headed over there with my dog, a galgo mix named Luke. I came into this scene of peace and quiet with the guys trying to gain Versace's trust.

I sat down and started pulling out treats and feeding Versace, and I gave some to Myles, who had started to gain his trust. Versace had gone over to Myles to get another treat from him and this time, he was close enough to catch. Myles grabbed his collar while I got a leash on him. We held him for a while and I fed him treats to calm him down.

Thankfully his dad Stanley showed up during the trust building process and was there with his car. Myles carried Versace to the car and sat with him until Stanley got in to hold him. And that's how Versace was caught.

I want to say a HUGE thank you to everyone involved. Tracy and Myles for catching Versace -- honestly without you two we might not have caught him! Thank you to Stanley, whose perseverance in finding his dog was unmatched. I saw signs for Versace everywhere and most people I talked to had heard about Versace already. It was an amazing feat to get this information out as efficiently as you did!

Thank you to Monica and Courtney, who stayed out for hours helping us search. Thank you to Michael who gave me a blow-by-blow of the sightings she had received. Thank you to Mimi, who religiously kept up with the Facebook threads and kept me posted on any important notices. Thank you to Claire who not only offered to come out, but also helped me get people organized.

Update: Versace’s adopters decided to return him to SHUG and recover from the very emotional events of the week. If you are interested in adopting Versace, please put in an application here.