Well, adventures might not be the right word. Trials and tribulations might be more accurate. But there is a mostly happy ending to this story of a SHUG supporter’s experience with the baffling and unpleasant canine disease known as symmetrical lupoid onychodystrophy.

SLO is an autoimmune disease (think doggie lupus) that affects only the nails. Many different breeds can be affected, including greyhounds. It can be painful for the dog and anxiety-producing for the owners. Here is Holly’s story:

Wynn, now 7, is a handsome ex-racing greyhound in perfect health. Last summer, he began licking and chewing his paws. I assumed allergies and reached for the anti-itch sprays and Benedryl, but they didn’t help. Then one day I noticed several of his nails looked odd – basically the quicks were “falling” out the back of his nails. A trip to a baffled vet led to a tentative diagnosis of a fungal infection. (This is a very common first misdiagnosis.)

Wynn was started on oral and topical anti-fungals, and prednisone, but the prednisone side effects were so dramatic and negative, I stopped after two doses. Some days later, I saw one of his nails had become completely separated from the quick and was flipped up like the hood of a car. This prompted another trip to a different vet. She assured me it was a “hang nail,” the result of trauma, not SLO. (Note to those now staring at their dog’s toes, this is a not uncommon reassurance, since many vets don’t know what SLO is.)

The vet gave Wynn a local and pulled the nail.

By then, the nail and quick separations were affecting multiple nails and a nasty bacterial infection was brewing in one -- a common side effect of SLO. We treated with an antibiotic and put Wynn on Tramadol for discomfort. (Note: Tramadol tastes nasty. It definitely requires peanut butter for administration.) And I started my research into SLO.

In a nutshell – there are two protocols. One protocol, recommended to me by renowned greyhound specialist Dr. Guillermo Couto, was a variety of immunosuppressive drugs, including prednisone, chlorambucil and/or dexamethasone. However, after our bad experience with prednisone I decided to try the second option, which was a combination of fatty acids and vitamins. 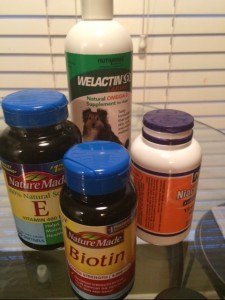 Specifically, for a 75-pound greyhound, I give this daily:

While it can take many months for the vitamin protocol to work, Wynn responded well. A few more nails eventually fell off, but he stopped licking his paws and is completely weaned off Tramadol. His nails are growing in normal and I’m considering cutting back or eventually eliminating the protocol.

Another SHUG supporter, Ron, had a similar experience. His first indication of SLO was a bloody toe nail, which he attributed to a traumatic injury. A second nail came off a few weeks later and that prompted a trip to the vet. As with Holly’s experience, Ron’s vet did not initially diagnose SLO. Eventually, as nails continued to come off, the vet came around to the diagnosis. Ron’s greyhound went on a similar protocol to Wynn with the addition of Doxycycline. The protocol did slow the nail loss and Ron’s greyhound eventually grew back her nails.

Here are some important tips: 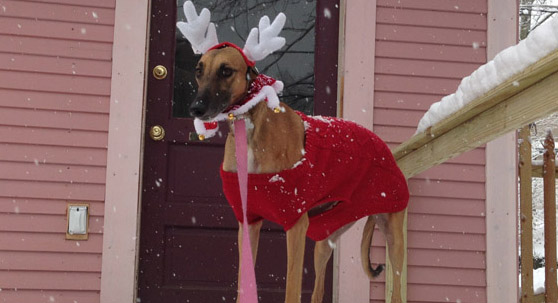 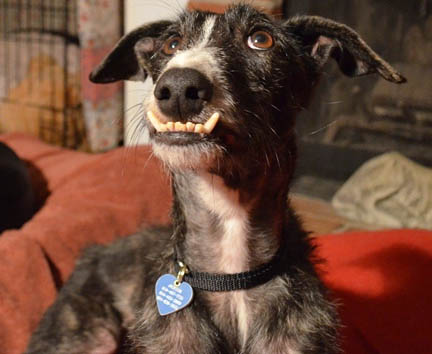 89 thoughts on “Adventures With SLO”