Exhibit A: See photo. Yes, Julia the Ibizan puppy is cute. So is her littermate, Merri, aka Exhibit B. (And, yes, both have adopters). But it's more than just being cute. Ibizan hounds are another Sighthound breed – along with Galgos – that are used for hunting in Spain, bred indiscriminately, and then discarded or killed when they are no longer useful.

While there are Ibizan hounds in the U.S., they are not common and because they look unique – unlike Galgos, which are often mistaken for American greyhounds – they do prompt the question: What is that? 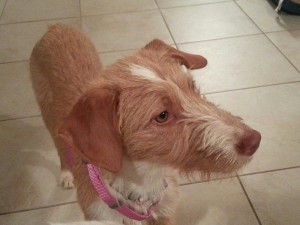 Ibizan hounds, sometimes more generically called Podencos, are a small to medium Sighthound, usually topping out at about 65 pounds. They come in a smooth or wire coat that is usually red or red and white (chocolate, like Merri, is uncommon). They have a typical, lean Sighthound body, but with a notable difference -- those big, stand-up ears (most of the time)! Ibizan hounds can also have striking amber eyes.

Ibizans are very attached to their families and love snuggling, according to Ylande Evison, who should know, as she’s a member of Ibizan Hound Rescue. 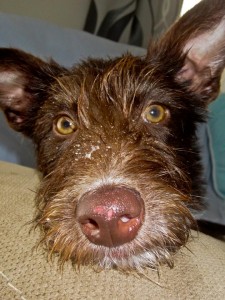 They are an active, engaging dog that is unusually intelligent. Case in point: An Ibizan hound brought to Louisiana from Spain snuck out from underneath the fence in his new home. He had been in the States less than 24 hours and in his home for less than 12. We all despaired of ever seeing Jester again. But that smart boy knew a good thing when he saw it – and he was found the next day trying mightily to squeeze back under the fence of his new home. That’s a smart dog.

Ibizans are very similar in temperament to Galgos. They are gentle, loyal, good with kids, sensible and highly interested in a soft bed or couch. But they are also known to be a bit “clownish,” and to enjoy entertaining their people – who may or may not always be amused by the entertainment. Ibizans can jump, for example, and they’re not afraid to show off their talents – be it the kitchen counter or a backyard fence. (Thus a 6’ fence is a requirement for those with fenced yards.)

A heads up, though, they can be a bit stubborn at times and very sensitive to harsh treatment or training. They do need a daily energy-burning session – and, as endurance runners, they make a great jogging companion. (As with all Sighthounds, they cannot be off leash except in a securely fenced area).They can be wary of strangers, until they understand the stranger means no harm.

All told, it adds up to an awesome breed of dog that stands out in a crowd. SHUG has two Ibizan puppies coming from Spain soon. If you’re interested in them or perhaps in a future adult Ibizan, put in an application and we’ll work to find you the perfect “beezer.”