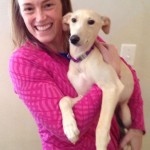 1. SHUG’s first dog was Mariposa, a Galgo puppy whose name means butterfly. She was adopted by Rachel Guthrie, who drove from upstate New York to Falls Church, Va., to pick up her dog. That was our first clue that people might be a tad interested in Galgos.

2. By far the most popular post on the SHUG blog is “The Scoop on Poop.” It’s been shared more than 10,000 times and viewed by more than 170,000 people. Yes, Sighthound people are OBSESSED with poop! 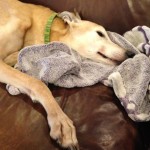 3. The Greyhound featured in the SHUG logo is John, formerly Johnny Jazz of the now defunct Seabrook Park in New Hampshire. John is loved by SHUG Director Michael Owens and has played nanny to a steady stream of fosters from Galgo puppies to lurcher seniors.

4. At just over a year old, the SHUG Facebook page features more than1000 pictures and has more than 3500 fans. 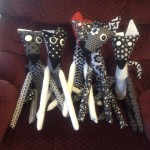 5. All the SHUGer dollies sold to raise money for SHUG are hand-made by volunteers based on a design developed by SHUG Director Michael Owens (who refuses to allow anyone to actually use a pattern).

6. SHUG's first on-line auction was so successful we were able to split the proceeds and donate $1,700 to Galgos del Sol, one of our partner shelters in Spain.

7. How long would it take someone in Virginia to find a Greyhound person in Texas to help a couple of stranded Galgos? About 15 minutes . . . and that's why we love Facebook!

8. Most of the initial SHUG volunteers were "Greyhound People" who shared a vision of helping their dogs' Sighthound cousins around the world. Their original goal was to place 10 dogs in their first year. They placed 94.

9. Of those 94 dogs in SHUG's first year, almost all of them passed through our Director's house . . . and the really amazing fact is -- she only kept one!

10. SHUG’s biggest fund-raiser to date is scheduled for July 15th at Dogfish Head Ale House in Falls Church, Va. We're taking over the restaurant for the day! There will be dogs, raffles, a silent auction, and live entertainment. Be there or be square!