Parting Is Such Sorrow – How Our Dogs Grieve

SHUG Adopter Beth’s senior Whippet, Henry, lost his battle with cancer recently, leaving behind Jake, the Whippet, and Sophie, the Galgo. When she came home from the vet without Henry, Jake and Sophie didn’t do their usual happy dance at the door. They sniffed Henry’s collar and leash and then just stood there, frozen in place. Those of us who have lost a member of our pack might recognize their response. 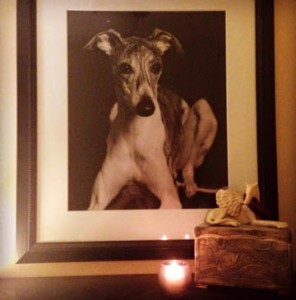 Both wandered around the house aimlessly for the next day or so, and stared at doors. Jake wouldn’t eat. Even after he started eating, he wouldn’t drink.

This prompted Beth to ask fellow SHUG supporters – How does your dog exhibit grief and what do you do about it?  This is some of what she was told:

Bonnie -- A few years ago, my pack of four was unexpectedly reduced to my two girls – a Lurcher and a Greyhound. The girls were devastated. They moped around and were listless for two months until we decided to add another Greyhound – then both girls perked up.  Because of that experience, we had our vet come to our home when it was time for one to say good-bye. That way, the remaining dogs not only have a chance to say good-bye if they want to, they watched the process, and got closure. We always give them a few minutes to sniff the dog that has passed so they know what has happened. The dogs do understand death and deal with it better than a disappearance.

Elise -- I had two siblings. When we lost Max, sister Luna didn't eat for about a week. When she finally started eating again, she would leave a small bit of kibble in her dish -- just as she had throughout their life together as her gesture of being alpha and eating first. Max would patiently wait for her to finish and then eat her little remaining kibble first before eating his bowl. It broke my heart that Luna continued to do that for months after he was gone.

Helen -- I had a Whippet stop drinking water when I had to put down my Ridgeback. They had been together for 10 years. My vet told me it was absolutely grief and that my dogs spent more time together than they did with me, and of course he was missing his buddy. Then he told me if I could, the best thing would be to get another dog. So I got my Whippet his own Whippet.

Elizabeth -- I was already going through the process to adopt a new dog for my old lady Greyhound as her littermate wasn't doing well. I thought I had some time when I lost him suddenly. My girl wouldn't move for two days. My Greyhound group brought Anna to my house. My girl immediately came back to life. Sometimes it doesn't matter if we are ready. We have to do what is right for the dogs left behind.

Susan -- Dancer was a tripod and after she passed Toshii walked like her for three weeks. They had not even been that close. When we knew Tango was going to leave us, we had him go to the bridge from home. The three girls all came in to sniff him before and after, and they had no grief whatsoever.

Kathy -- Given the chance, it is important to let them get their sniffs in. A longtime friend told me a remedy that she has used with her Greyhounds and I have incorporated into my family as well. If the dog passes away at home, they each get their smell time. However, if the dog has to be euthanized at the vet’s, I always bring their collar and blanket home and place it on one of the dog beds. They will each go and lay on top of it at their own pace. This seems to help them find closure and then they can move on.

Wendy -- When I had to put down my Greyhound/lab mix my little fluff terrier stayed home. When I came back she was very confused --searching the house and sighing heavily. This went on for a few days. She also acted leery of me. Normally a clingy dog, this went on for about a week.

According to Beth, both of her dogs are back in their usual good spirits, although Jake is more clingy now. “I miss my grumpy old man more than words can say,” she said. “He was my heart dog and constant companion for 12 years. But these two are helping me get through the loss.”

For anyone who has ever had a dog, there is little doubt they feel joy – and grief. Tell us about your experience in the comments below.