From the Director: Inch by Inch

No one knows where he came from, but somehow this sweet Greyhound boy found himself in a kill shelter overseas. He had open wounds, intestinal parasites, and heart worms -- and his story could have ended there. But this lucky boy found a group of Sighthound lovers who helped him find his way to North America and the good life.

Sounds like a SHUG story, doesn't it? But this boy wasn't in Spain or the Middle East. He was in Incheon, South Korea. And Inch, as he came to be known, was rescued by a group who have come to call themselves Team Inch.

Now this group of U.S., Canadian, and Korean Sighthound lovers is joining SHUG.

Since our incorporation in December of 2012, SHUG has brought 100 Sighthounds into rescue from across the country and around the world. We have rescued dogs from Spain, Qatar, Dubai, and Kuwait to date, as well as Colorado, Kansas, Arkansas and Maryland. And now we’re expanding our reach thousands of miles across the Pacific to South Korea.

Rescuing dogs in Asia isn't easy. Most, like Inch, need vet care, boarding, and transportation. When Canadian volunteer Samara Schmidt first saw Inch's picture, he was in bad shape but she “just knew he was coming home with me.” And on Christmas Eve of last year, he flew into Seattle and spent three weeks getting healthier before traveling home to Samara in British Columbia. 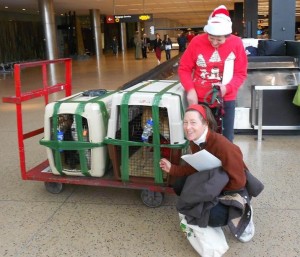 Inch arrives in Seattle on Christmas Eve greeted by Xan Blackburn (kneeling) of Team Inch and Moira Corrigan of GPI.

“It was a Christmas miracle for everyone,” said Samara.

Team Inch has been partnering with Greyhound Pets, Inc. in Seattle to bring over other Greyhounds from South Korea. Many of these were born in Australia as racers--or their parents were--but have found their way into the Korean kill shelters or meat markets. Team Inch also helps Deerhounds, Afghan Hounds and other Sighthounds as well. Hmm, is this starting to sound familiar? We thought so, too. 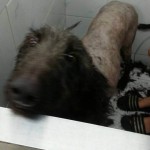 The first SHUG dog from Korea is a sweet Deerhound girl named Juni. Her coat was so matted that she had to be shaved to the skin and, like Inch, she's heart worm positive. But don’t worry – SHUG and Team Inch and their awesome group of Canadian, American and Korean volunteers are on the job!

As for Inch, he is a happy boy with a strong will to survive! According to Samara, he wants to play all the time and is slowly coming to accept his good luck.

“I promised Inch that he would never experience suffering again,” says Samara. “Our goal is to give them ALL a second chance to know love. Inch personifies that journey.”

Please join us in welcoming Inch and his fans to SHUG and help us bring Juni into the Underground in the coming weeks. Her medical and travel expenses will top $2000, but we believe she deserves this chance at the good life. If you're interested in donating toward Juni's care, you can use the "donate" button on this page or on our homepage. As always, your donations to SHUG are tax deductible.