Copa looks good in oil (courtesy of his foster mom, the painter). He also looks good in person. His foster mom reports the young Podenco from Spain has been blossoming since his arrival and is really coming out of his shell. He’s now a silly, goofy, very playful dog -- when he’s not sitting still long enough to be immortalized on canvas. He loves his toys verrrry much (there might be a Toy De-Stuffer Anonymous meeting in his future) and will entertain himself for hours, rolling around in a toy mountain of his creation! 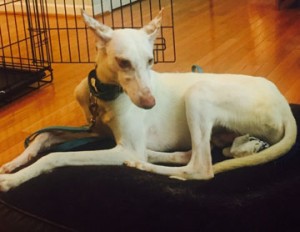 Foster mom also reports that Copa loves his crate and does well with the other dogs in the household. He’ll even indulge in a gentle tug of war with the resident Italian greyhound.

He gets better on the leash every day and enjoys walking with the pack. Copa also loves to run and leap around, so a back yard to play in or a jogging partner would be ideal.

Copa is fostered in the D.C. area and is available for adoption throughout the US and Canada. His adoption fee is $650, which covers his flight from Spain, neuter, and other veterinary care. If you're interested in adding this lovely man to your pack, fill out an application at http://sighthoundunderground.com.