I happened upon the Sighthound Underground rescue group when surfing the web looking for Irish Wolfhounds.  My husband and I had two Wolfhounds for many years and loved them.

We had recently gone from three dogs to one -- a senior Pug-Boxer mix named Harley. I was ready for another dog and was intrigued by SHUG. I followed them on Facebook for several weeks and finally submitted an application. 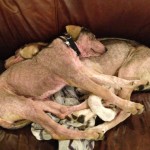 The pups had a rough start.

I had been following Dora and Davey, the two Saluki mix puppies born with severe mange. Soon I saw Davey had been adopted and I watched for the posts from Dora’s foster mom, Adrienne. Her ‘DailyDoraDose’ began to creep slowly under my skin. (pun intended)

In late June, I scheduled a visit to see some of the SHUG dogs, and brought Harley with me. I was immediately comfortable with Michael, SHUG’s director, and Dora’s Foster Mom, Adrienne. We sat on the floor surrounded by dogs.  I noticed Dora was a bit nervous and wouldn’t leave Adrienne’s lap. But eventually she ventured over to me.  I think we stayed for over two hours, and Harley and I left with Dora.  I called my husband and youngest son to say I was bringing home a dog.

It’s now five months later. It’s been an interesting journey thus far with our new dog, now named Zora. She was extremely anxious from the beginning. One neighbor described her “as being afraid of the air she breathed.” She would shiver and tremble at almost everything the first few weeks. I was her rock. We bonded immediately.

I knew over time, she would bond with my husband and son. It just took time and patience. My husband is a psychiatrist and works with wounded warriors at Walter Reed Medical Center. He said Zora reminded him of the returning soldiers he sees, specifically, behaviors that resemble post-traumatic stress.

Zora has just completed her first basic obedience class and won a short rally competition. Her confidence is improving. Meanwhile, SHUG members are incredibly supportive, so I never feel alone in this journey. Zora ‘s love and affection is abundant to all of us now in the household and we are very grateful she’s in our lives!

First Person is an occasional series where we hear the stories of previous adopters. The author is Monica Boruch.