My husband and I adopted a Galga about a year ago. She was a lovely dog, and was perfect for me and our other five dogs, but she was terrified of my husband. Try and train as I might, I could not get her to accept living with him in the house.  We were forced to return her to SHUG and resumed our search for another dog.

I continued searching for another dog for us. I found some lovely dogs, and some fantastic rescue people, but none felt right. And, I kept feeling pulled back to Spain to adopt. Eventually, I contacted Beverley Farmer with Podenco Friends. She showed me Zara, and I knew she was the right dog.

Zara is spunky, sweet, and very athletic. She was found as a stray by two kind women, and was taken in immediately before a big storm. They brought her to Beverley and Warren, who opened their home to her and got her all of the vet care that she needed.

Once I committed to her, plans were made for her journey from Murcia, Spain, to SHUG HQ in Virginia, where I picked her up and took her home.

She has taken all of these stressful moves in stride. She gets along great with our other dogs, and she is learning our routines very quickly. She's found her home, and she knows it. 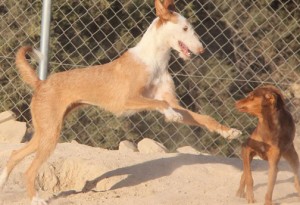 I have renamed her Piña (pineapple in Spanish) for several reasons. First off, her fur is spiky like a pineapple, and she's sweet, but with a little bit of "tang" to her. She also has a little white puff on the top of her tail that spikes out when she's on the scent of something, and it looks like the top of a pineapple.

But the real reason I chose it is as a bit of a tribute. I am a Spanish teacher, and I work with tough, inner city kids. Jonathan Kozol is a writer who has done lots of research in high poverty areas like New York and Chicago. He met a girl named Pineapple years ago in poverty-stricken inner city New York.  Pineapple had a spunky personality and won the love and support of many, and was sent to excellent schools where she learned to read, went to college, and is now a teacher. Hers is a story of the resilience of the spirit, and of the kindness of others who believed in her and helped her get where she is today.

It's really this dog's story, too.

First Person is an occasional series where we hear from previous adopters. The writer is Stacy C. Díaz.