First Person – A Beautiful Lurcher Makes a House a Home

In the late 1990s, while living in Florida, my husband and I admired ex-racing greyhounds for adoption, but our lifestyle wasn’t conducive for a dog.  And our situation didn’t get more conducive until we moved to Northern Virginia in the summer of 2014. Hot on our list for house hunting was a fenced yard for, you guessed it! A DOG!

One day in my front yard I spotted two people walking a whippet and all my greyhound loving memories returned. In discussion with friends I was told to reach out to a neighbor, Maureen, who had recently adopted a Spanish Galga (Maxima). Maureen referred me to SHUG and brought Maxi by for us to meet.

Unfortunately, none of the galgas SHUG has at the time was a match as we only had a four-foot fence, and the dog would have to be an “only.” But there was another possibility – a young Lurcher girl fostered in Illinois. After discussing Phoebe (the Lurcher) with her foster mom, I was smitten.

SHUG swung into “underground” action and organized multiple people to transport and overnight her through the necessary sections until several days later Phoebe ended up in Maryland.  We took her home after the first meeting and she has slept in our bed ever since. 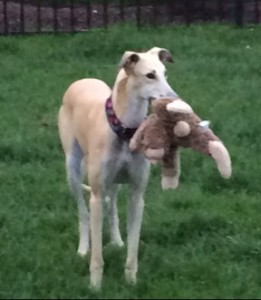 Phoebe was bred to be a coyote hunter in Kansas.  The breeder posted an ad for her on Craigslist stating she was half Greyhound and half deer hound.  Fortunately, thanks to volunteers in the area who were on the alert for Sighthounds in need, she became a SHUG dog. No one knows what conditions she lived in or why they didn’t want her – but after having her in our family for several months, my bet would be on her complete lack of prey drive!  She isn’t much of a hunter. One of her BFFs is a neighborhood Jack Russell and cats don’t interest her at all. She loves everyone – except perhaps birds and the occasional perky squirrel.

Phoebe is the most awesome dog (unbiased opinion).  She is incredibly bright and quickly learned all of the standard tricks. She didn’t have much experience on the leash, but I learned early that she walks much more comfortably with a harness and now walks like a champ. She loves everyone in and out of the house. Her favorite games are to play fetch with a Nerf football and squeaky stuffed animals.

Phoebe walks my son to the bus stop every morning and she starts sitting at the front window waiting for him as soon as the buses begin their afternoon rounds. We walk down to the stop and when he gets off of the bus, she “roos” and he “roos” back. I’m still trying to get that on video! And when my daughter was sick, Phoebe was right by her side.

Out of curiosity I had her DNA tested; she is predominately greyhound and three generations back she was mixed with another type of hound. It is so distant that the DNA isn’t certain, but their best guess is coonhound (so much for the deerhound ancestor!). She has a softer coat than a regular Greyhound and a fluffier tail, but looks Greyhound in structure. It is very common that she gets stopped for photographs; the funniest are the people who want me to use their camera to photograph them and Phoebe together. I simply warn them that I cannot be held responsible for random Lurcher kisses!

First Person is an occasional series where we hear from SHUG adopters and supports. The author of this post is Traci Picciano.

Note: If you're thinking a Lurcher might work in your home, check out our Foster Friday post on Willy and Goldie.