Doggie Monikers — What’s In a Name? 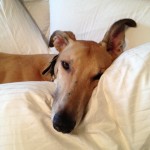