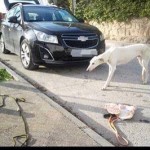 Klein just about to be captured.

Leave a Reply to John